Although soft and liquid matters are fundamental states of matter and valuable for humans, our physical understanding of these systems lags far behind the solid state due to their complexity and lack of order. Our research group focuses on the spatiotemporal hierarchy of simple liquids and soft matter to develop a unified picture of the physics governing these systems and bring about new developments in liquid and soft matter physics. Specifically, we are investigating non-equilibrium phase transition phenomena in soft matter, the effects of liquids on the dynamic behavior of soft matter and biological systems through hydrodynamic interactions, glass transition phenomena, crystallization, thermodynamic and kinetic anomalies in water-type liquids, the origin of liquid-liquid transition phenomena in single-component liquids, and nonlinear flow and fracture phenomena in liquids and glassy materials.

Water exhibits unique properties not seen in other molecular liquids, such as a maximum density at 4°C and an increase in volume upon crystallization. Such anomalies have been recognized since Roentgen's time, and since then, controversy has continued over its origin for more than a century. We have argued that the origin of the anomaly lies in the dynamic coexistence of two types of structures: tetrahedral structures and more disordered structures, which form locally in liquids. We have also recently shown that although there is likely to be a liquid-liquid transition in water due to the cooperative formation of these two states, the criticality of the transition has little effect on the physical properties of water in the liquid state experimentally accessble. It can be said that this two-state nature, which is not found in simple liquids, is the origin of the unique property of water, which can change its properties freely depending on various environmental factors. In this project, we study the properties of water as a liquid, the hydration around ions, the elementary processes of crystallization in bulk, and the structural ordering of water at air interfaces and solid surfaces and their effects on ice nucleation. We are also studying silica, silicon, and germanium, which have the same tendency to form tetrahedral structures as water.

The origin of the slow structural relaxation near the glass transition point has been discussed from various viewpoints, but the origin remains unresolved. We propose a scenario in which a directional order with a locally lower free energy is formed in the liquid as the temperature decreases, and the increase in the correlation length leads to an increase in the activation energy, resulting in a dramatic slowing of the structural relaxation near the glass transition point. Such an orientational order is difficult to detect in two-body density correlations accessible in scattering experiments. Therefore, contrary to conventional liquid theory, the description of supercooled liquids requires, in addition to density, another order parameter that characterizes many-body orientational ordering (the two-order-parameter model). This means that the liquid state, even for a simple liquid such as a hard-sphere liquid, cannot be uniquely specified by density alone. We have shown that the directional ordering of such supercooled liquids has a profound effect not only on the glass transition but also on crystallization. This project aims to clarify the effect of such orientational ordering of liquids on the dynamics of supercooled liquids near the glass transition point from a microscopic viewpoint and elucidate the intermittent dynamics in solid-like states such as aging below the glass transition point. It is also known that the low-temperature amorphous materials exhibit thermal and mechanical properties significantly different from crystals, such as an excess density of vibrational states compared to crystals. We also aim to elucidate the physical origin of this difference.

Liquids have been thought to be homogeneous and isotropic, described only by density. Conventional theories of crystallization, such as classical nucleation theory and density functional theory, have been built on this assumption. However, as mentioned above, liquids try to lower the free energy by increasing the local packing to reduce the entropy (entropy origin) or by gaining energy through directional coupling (energy origin). In other words, liquids tend to have localized directional ordering due to many-body interactions. In particular, we found that supercooled liquids prone to crystallization tend to have orientational ordering whose symmetry is consistent with a crystal to be formed. The spontaneous formation of the precursor in the supercooled liquid has the effect of significantly lowering the interfacial energy at the crystal-liquid interface, and as a result, crystal nucleation is promoted by the precursor. In addition to the microscopic elucidation of the mechanism of crystal nucleation, we are also investigating how such precursor formation affects the crystal growth mechanism and the glass-forming ability.

Process of viscoelastic phase separation in a polymer mixture

Soft matter, such as liquids, polymers, liquid crystals, amphiphilic molecules, colloids, and proteins, has attracted much attention as an essential group of materials with an interdisciplinary character spanning the fields of physics, chemistry, biology, and materials science. They are characterized by a multi-layered dynamic hierarchical structure with liquid components as the lowest-order hierarchy, and their softness is a consequence of the dominance of mechanical properties by large and sluggish higher-order-level structures. The softness is a result of the dominance of mechanical properties by a large and sluggish higher-order-level structure. The characteristic of its physical, chemical, and biological functions lies in the cooperativity in the expression of the functions, which is unique to systems that contain many degrees of freedom in a hierarchical manner (multi-degree-of-freedom/hierarchical systems), as typified by proteins. We believe that this is the key to the efficient expression of diverse and superior functions in biological materials, despite their apparent slowness. Such cooperative expression of functions is the weakest point of conventional materials. The most essential factor responsible for this cooperativity, i.e., dynamic coupling between hierarchical levels, is the liquid, the lowest level component of soft matter: (1) flowability and (2) dynamic hierarchy of the liquid itself. However, the role of the former is still unknown due to difficulties caused by its non-locality, and the latter's importance has not been properly recognized. In this study, we focus on the role of hydrodynamic interaction, which is a many-body long-range interaction, in order to clarify the basic principles of dynamic coupling and cooperative function expression in multi-degree-of-freedom and hierarchical systems.

Soft matter, supercooled liquids, and amorphous solids exhibit strong nonlinear responses to external deformation. The nonlinear mechanical response and fracture mechanisms of these material systems are not well understood. We believe that the coupling of the order parameter that shows heterogeneity with destabilization with the viscoelastic parameters that characterize the mechanical properties of the system is essential for the macroscopic description of these nonlinear mechanical responses. Such coupling arises because the mechanical properties of the system strongly depend on the order parameter, which is a conserved quantity such as polymer concentration or density (dynamic asymmetry). This mechanism is physically the same as the viscoelastic phase separation described above. Based on this idea, we are studying the physical mechanism of the nonlinear dynamic response of orderless systems and trying to provide microscopic support for it.

Phase transition and dynamics of thermotropic and lyotropic liquid crystals

Modeling of the response of charged colloids under electric fields incorporating competition among complex degrees of freedom, including hydrodynamic , ion, and ion dissociation degrees of freedom and its applications.

The frosting is a phenomenon in which water vapor solidifies on the surface of a solid cooled below 0°C and grows directly as ice crystals, or in which water droplets are first formed on the surface of a solid by condensation of water vapor as the temperature drops, and then ice crystal nuclei are formed on the substrate and grow to form a frost-like structure. Although this phenomenon is widely observed in nature and is quite common, it is not fully understood physically. The frosting phenomenon is also an extremely important phenomenon from an engineering and social perspective. For example, frosting is known to cause various serious problems, such as reducing the optical transparency of transparent glass, causing a significant reduction in the thermal efficiency of heat exchangers, damaging concrete, and making it difficult for aircraft to fly stably. Therefore, this project aims to elucidate the physical mechanism of this non-equilibrium phenomenon from a new hierarchical perspective, from micro to macro, to provide a fundamental understanding of this phenomenon and establish basic physical guidelines for solving the above serious problems. 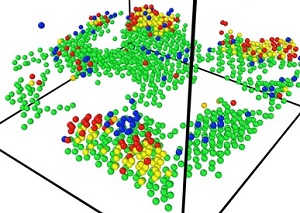 Materials without a periodic structure, including soft matter and amorphous materials, have unique mechanical (elasticity, yield and fracture behavior, and moldability) and thermal properties (specific heat and thermal conductivity) that are very different from those of crystalline materials and have been shaping human history through their application in various fields. The structure of irregular systems has been studied based on the position of the center of gravity of the constituent particles, but the structural characteristics of these systems remain elusive. Therefore, a fundamental understanding of their structure-property relationships still lags far behind crystals. We are convinced that the momentum conservation law is closely related to determining the system state in the nonequilibrium state, even in the seemingly motionless solid state. By combining thermodynamic and kinetic approaches with the entirely new kinetic perspective of “self-organization of the mechanical network percolated throughout the system,” we aim at elucidating the structural features of materials in the nonequilibrium solid state, such as glasses and gels, as well as the physical mechanisms that determine their specific mechanical and thermal properties.

Formation of a stable force network associated with the glass transition